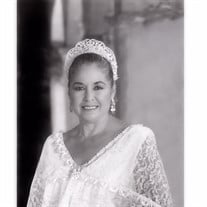 January 8, 1933 - April 24, 2017 Lillian passed away on Monday, April 24, 2017. She was born and raised in East Los Angeles where she married Alberto Pizano and where their two sons and two daughters were also born and raised. She devoted her life to her husband of 65 years. An effective advocate, she supported and participated in many of his political and social advocacy endeavors, such as the community effort to clean up the lake in Los Angeles' Lincoln Park. In Los Angeles, her husband was uncommonly involved with the Democratic Central Committee, and was President of the Monterey Park Democratic Club. He took major responsibility for local activities related to Robert Kennedy's presidential campaign and because of his involvement they were both in attendance during the events at the Ambassador Hotel on June 5, 1968. While many issues were important to Lillian and her husband, Latino issues were the most important. The family moved from East Los Angeles to Santa Barbara in the late 1970s when her husband accepted a promotional opportunity to be District Manager for the Southern California Gas Company. During her time in Santa Barbara she volunteered for many local organizations such as Old Spanish Days, The Hispanic Achievement Council, the Santa Barbara Mariachi Festival, and the Flamenco Arts Festival. One of the highlights of her life was serving as the First Lady of Old Spanish Days when her husband became El Presidente in 1987. As First Lady, she was proud of her duties, including designing the costumes and coordinating activities for the flower girls. While hosting many charitable events Lillian's beautiful smile, laugh and kind demeanor would light-up the room and put people at ease. She loved the Arts having attended numerous performances at both The Granada Theatre and the Lobero Theatre, as well as various museums and art exhibits on the West Coast, Central America, South America and Europe. Lillian was in many ways ahead of her time. She had an independent conscience from an early age. She was very modern and competitive. Having been the captain of her high school volleyball team, she couldn't help but enjoy watching sports, especially the Super Bowl with her husband. She was so enchanting, Bobby Darin asked her for a dance rather than her many girlfriends sitting at the same table. She is eternally graceful and beautiful. She embraced the roles as loyal wife, devoted mother, loving grandmother and a dedicated, compassionate, supportive community leader which were paramount. She will be greatly missed, but her family finds comfort that she is reunited with her husband Alberto and her two sons, Michael and Paul. Lillian is survived by her daughters, Vibiana Pizano Smith and Sonia Pizano-Bellotti, her sons-in-law Brian Smith and Philip Bellotti, and her two grandchildren, Pablo Pizano and Jaclyn Pizano Smith. Services will be held on Friday, May 5, 2017 at the Santa Barbara Cemetery Chapel, 901 Channel Dr, Montecito, at 1:00 pm. A celebration of life will follow at 1207 Miramonte Drive, Santa Barbara, CA. In lieu of flowers, the family request that donations be sent to The Leukemia And Lymphoma Society at 4929 Wilshire Blvd, Suite 800, Los Angeles, CA 90010 or online at www.lls.org.

January 8, 1933 - April 24, 2017 Lillian passed away on Monday, April 24, 2017. She was born and raised in East Los Angeles where she married Alberto Pizano and where their two sons and two daughters were also born and raised. She devoted... View Obituary & Service Information

The family of Lillian Pizano created this Life Tributes page to make it easy to share your memories.

Lillian passed away on Monday,...