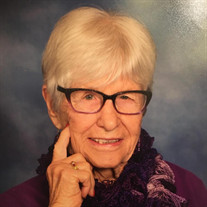 Loretta Verhasselt January 31, 1928 – August 22, 2021 Loretta Christine (DeCleene) Verhasselt, our beloved mother, sister, wife, grandmother and great-grandmother, passed away peacefully on August 22, 2021 after a visit from Msgr. Stephen Downes. She was surrounded by her close family and supported by the loving prayers of many relatives and friends. Born January 31, 1928 on the family farm in DePere Wisconsin. Upon graduation from DePere High, Loretta took a position at the Hickory Grove Sanitorium. It was through her friendship at work with her future mother-in-law Josie Verhasselt she met her husband Basil. They were married January 5, 1949 and moved their young family to Santa Barbara California in 1960. Loretta quickly formed deep roots in the community, volunteering extensively at Saint Raphael‘s Catholic Church, starting as President of the Women’s Council in 1962 and again in 1996 as President of the Women’s Auxiliary. Loretta was a Founding Member and 2001 Volunteer of the Year of the Santa Barbara Breast Cancer Resource Center and a longtime member of the Ladies of Charity. She loved to bake bread for her family and to offer homemade bread and treats to others in a gesture of friendship. Loretta was a great cook, working in the Goleta Valley Junior High Cafeteria for several years before becoming a school bus driver. An avid gardener, she enjoyed “digging in the dirt”, sharing her love of nature and flowers, creatively competing in various Santa Barbara Garden Shows. Loretta was an exceptionally vibrant woman, loving mother and grandmother, dedicated friend, volunteer and organizer. Her laughter, joy of life and knack for bringing people together will be remembered and greatly missed. Loretta is survived by her sons Jerome (Susan) Verhasselt, Jim (Sharon) Verhasselt and her daughter Karen (Peter) Arnold; her four grandsons Adam Verhasselt, Sam Verhasselt, Gregory (Allison) Arnold, Chris (Kristin) Arnold; and her great-grandchildren, Micah, Oliver, Amelia and Finn Arnold. She is also survived by four DeCleene sisters, Helen Verhasselt, Alice Morrell, Joyce DeCleene, Judy (Bob) Johanski all residing in Wisconsin and her sister-in-law Zita Wessa of Arizona. Ever devoted to her family, she was preceded in death by her beloved husband Basil Verhasselt, her parents William & Christine DeCleene, and nine siblings Howard DeCleene, Leo DeCleene, Harold (LaVerne) DeCleene, Vic (Leona) DeCleene, Rita (Donald) Boucher, Sister Mary DeCleene, Bernice (Howard) Strenn, Aloysius (Joann) DeCleene and Sister Vonnie DeCleene. A Vigil Service will be held at Welch-Ryce-Haider Funeral Chapel, 450 Ward Drive on October 15 at 7:00 pm, a Funeral Mass on Saturday October 16 at 9 am at St Raphael’s Church 5444 Hollister Avenue. In lieu of flowers, donations can be made to FORCE: Facing Heredity Cancer Empowered www.facingourrisk.org/donate

The family of Loretta Verhasselt created this Life Tributes page to make it easy to share your memories.