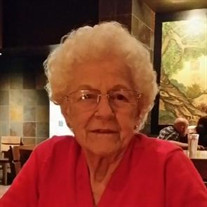 Foster, Margaret Ann “Marge”, passed away peacefully at the age of 88 on March 29, 2016, of cancer in her home with her family by her side. She was born in Loyal, Wisconsin, on June 24, 1927 to Estella and George Roth and was raised on a farm with her nine brothers and sisters. After high school, Marge attended secretarial school in Milwaukee. She married Ken Foster in a double wedding with her sister and his brother on June 5, 1948. They lived in a number of places, settling in Goleta, California, in 1973. They were members of St. Raphael’s Catholic Church for 30 years. Marge enjoyed sewing, Irish music, square dancing, bridge and reading. She is survived by her four children; Randy, Babs (Barbara), Donald and Patricia, ten grandchildren, four great grandchildren, her brother Joseph and her sister Rita. She is preceded in death by her son Ronald, her husband Ken, her parents and seven siblings. Viewing will be held on Wednesday, April 6th, from 11:00 am - 12:00, at Welch Ryce Haider Chapels, 450 Ward Drive, Santa Barbara, CA 93111. A funeral mass to be held at St. Raphael’s Catholic Church at 1:00 pm on the same day, private interment immediately following the service.

The family of Margaret Ann Foster created this Life Tributes page to make it easy to share your memories.

Foster, Margaret Ann “Marge”, passed away peacefully at the age...