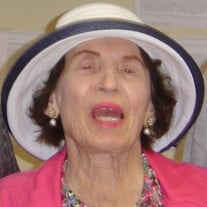 Longtime Santa Barbara resident, Maria Chliwnyj, passed away peacefully on Saturday, September 25, 2021 at Cliff View Terrace in Santa Barbara. She was 95 years of age. Visitation will be held on Monday, October 11, 2021 at 3:00 p.m. at Welch-Ryce-Haider Funeral Chapel and a graveside service will be held on Tuesday, October 12, 2021 at 1:15 p.m. at Santa Barbara Cemetery. Maria Chliwnyj was born on April 18, 1926 in Ukraine to Warwara and Matvej Krivenko. She and her parents escaped the Communist-created famine to Poland. Later they were captured by the Germans and taken to forced labor camps in Germany for the duration of WW2. Eleanor Roosevelt advocated for America to accept the displaced persons as part of a humanitarian rescue effort. ,Maria traveled all alone on a transport ship to Ellis Island and on the deck caught a glimpse of her future husband-to-be, Konstantin Chliwnyj. They finally met in the train station in New York City and she was headed to Buffalo, New York. Konstantin and a friend he made on the ship were going to Santa Barbara, but the friend had an uncle in Buffalo. It was through his uncle that Konstantin exchanged letters with Maria. Later, Maria’s parents also arrived through Ellis Island and settled in Buffalo with their sponsor. Konstantin had settled in Santa Barbara and proposed marriage to Maria, asking her to join him there. She had grown tired of the cold and snow and moved to Santa Barbara where she rented a room and started working in a coffee shop on State Street. They married in Santa Barbara and became naturalized citizens on March 12, 1958. Konstantin and Maria created a family of three sons: Alexander, Valentine, and Constantine. They cherished their family and enjoyed their freedom with grateful hearts. For decades, Maria relished her lengthy strolls along State Street wearing one of her signature hats and was recognized by many as “The lady with many hats.” Maria is survived by her son, Alexander of Tucson, AZ, her grandchildren, Clayton Chliwnyj of Palo Alto, CA, Katarina Chliwnyj of Pahoa, HI, and Brandon Chliwnyj of Santa Barbara, CA, great-granddaughter, Zoe Port-Chliwnyj of Reno, NV. She was preceded in death by her husband, Konstantin Chliwnyj, sons, Constantine and Valentine, daughter-in-law, Kimberly, and grandsons, Zack and Zane. The family expresses heartfelt gratitude to everyone at Cliff View Terrace for their exceptional care and professionalism. Arrangements are under the care of Welch-Ryce-Haider Funeral Chapels.

Longtime Santa Barbara resident, Maria Chliwnyj, passed away peacefully on Saturday, September 25, 2021 at Cliff View Terrace in Santa Barbara. She was 95 years of age. Visitation will be held on Monday, October 11, 2021 at 3:00 p.m. at Welch-Ryce-Haider... View Obituary & Service Information

The family of Maria Chliwnyj created this Life Tributes page to make it easy to share your memories.