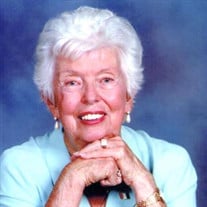 Marion Frances Loftus Fortunato was born on March 20, 1926 in Los Angeles, California. She was the eldest daughter of Michael J Loftus DC and Anna Martin Loftus, and beloved older sister to her “baby brother” Michael J Loftus. She spent her childhood days in California, from Los Angeles and Pasadena, all the way up to San Francisco. She always had a love for architecture, and in her youth would admire the surrounding buildings during her breaks from her job in Downtown LA at Barker Brothers Furniture. Ever stylish and graceful, she always loved to dance. It would be while selling tickets to a Y.L.I. dance in Ventura, a Catholic Women's Organization, where she would meet her future husband after he was discharged from the Navy. Frank James Fortunato swept Marion off her feet, and the couple would clear dance floors with their ballroom dancing, and in particular, the jitterbug. They married on October 9,1947 at Saint Thomas Aquinas Church in Ojai. Together they moved to Highland Park, Illinois and started a family. Family and the California springtime kept calling them back. They moved to Santa Barbara in 1951 and eventually bought their first home in Carpinteria in 1955. They loved to entertain friends and family, and the smell of homemade Italian food wafted through the Fortunato household on any given Sunday afternoon for the family supper. Marion loved to garden, and their backyard was always lush and blooming, especially with roses which she tended to lovingly. Holidays filled the home with sparkling decorations, and later with grandchildren who brought Marion immeasurable joy. Marion also collected 1st Day Cover U.S. Stamps and shared many hours with her grandchildren reviewing and discussing her collection. Her love of craft and devotion showed in the clothing she sewed for her daughters, and the Raggedy Ann dolls she lovingly made for her granddaughters. Always thoughtful and generous in her service to others, Marion was an active volunteer at the schools her children attended, St Joseph’s Parish and Los Chiquitos, a Carpinteria auxiliary. In later years she took up lawn bowling, which became a favorite activity when she wasn’t traveling. The world excited her, in particular, Ireland and Australia, and her adventurous and gracious spirit took her across the globe. In 2009 Marion moved to Valle Verde Retirement Community in Santa Barbara and joined The San Roque Catholic Parish of Santa Barbara. She met many new friends and reconnected with friends separated over time. Marion is survived by her brother Michael J Loftus. She is also survived by her children; Cathy Fortunato, Teressa Van Wingerden, Frank Fortunato (Debbie), Jeanne Pettit (Dennis) and Leo Fortunato (Marian), and her grandchildren; Robert Van Wingerden, Christopher Pettit, Jennifer Van Wingerden Murray (Garth), Lisa Pettit Howard (Jacob), Amy Fortunato, Karen Fortunato, Justin Fortunato, and Katie Fortunato, and her great-grandchildren; Marie Howard, Rylee Howard, Nolan Howard, and Éowyn Murray. She was preceded in death by her beloved husband, Frank J Fortunato, her father Michael J Loftus DC, her mother Anna Martin Loftus, her son-in-law Hank Van Wingerden, and her grandson Paul Van Wingerden. A Mass was held at 10:30 am on Tuesday, August 30, 2016 at San Roque Catholic Parish in Santa Barbara, followed by a graveside service at Carpinteria Cemetery. In lieu of flowers, her family is asking that donations be made in her name to : Monastery of Poor Clares, 215 E. Los Olivos St., Santa Barbara, CA 93105. Funeral arrangements are under the direction of Welch-Ryce-Haider of Santa Barbara.

The family of Marion Frances Fortunato created this Life Tributes page to make it easy to share your memories.