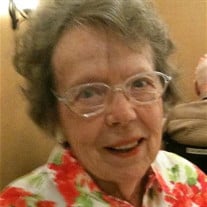 Mary Elizabeth Dawson Santa Barbara, CA June 3, 1921-August 5, 2016 Mary was born in Iowa City, Iowa to Leroy S. and Isabel Mercer. She grew up in Iowa City where her father was Mayor, a state senator, and prominent businessman. She graduated from the University of Iowa and was a member of Pi Beta Phi sorority and Phi Beta Kappa. She married John H. Dawson, also of Iowa City, on August 12, 1948 and moved to Stillwater, Oklahoma where he taught engineering. In 1953 they moved to Downey, CA where they lived for 50 years and raised their four children. She was a member of St. Mark’s Episcopal Church and sang in the choir. Mary had a passion for orchids and collected them from around the world. As a member of the Orchid Society she shared her green- houses during numerous backyard luncheons and events. Mary appreciated international culture, visiting Europe, South and Central America, Polynesia, and Africa. She volunteered at Downey Community Hospital and was a member of AAUW. In 2007 she and John moved to Vista Del Monte Retirement Community in Santa Barbara and established many wonderful friendships. She dearly loved her family for whom she modeled love and servanthood. She was dearly loved in return and will be deeply missed by her family and friends. She was preceded in death by her parents Leroy Samuel Mercer of Ohio and Laura Isabel (Brandt) Mercer of Iowa and her sister Dorothy Harriet Mercer of Iowa. She is survived by her devoted husband John Howard Dawson of nearly 68 years and her four children, Edwin Leroy Sayre of Iowa City, Iowa, Francis Mercer Dawson MD and his wife Cheryl of Thousand Oaks, CA, Dorothy (Dawson) Woodward and her husband Charles of Byron, GA, and John (Jack) H. Dawson Jr. DC and his wife Susan of Santa Barbara, CA. She is survived by five grandchildren Francis Michael Dawson, Margaret J. (Dawson) Schink and her husband Tad, Melissa N. Dawson and her fiancée Eric Bravo, Peter Dawson, and Elizabeth Boragno and 5 step grandchildren, Shellie Balsz, Stacey Moreau Schulz, Kristin Staggs, James Woodward, and Sara Zumello. She has three great grandchildren and ten step great grandchildren. A celebration of her life will be held at Vista Del Monte in Santa Barbara on August 21 at 3 PM. In lieu of flowers a donation could be made to the Conejo Free Clinic in Thousand Oaks, www.conejofreeclinic.org or to the charity of your choice.

The family of Mary Elizabeth Dawson created this Life Tributes page to make it easy to share your memories.