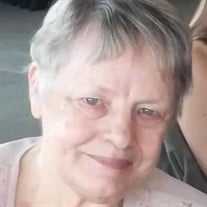 It is with heavy hearts we share that Mary Louise Wright Gechter went to her heavenly home on January 24, 2021 after a recent diagnosis of Lymphoma and a longer battle with Lewy Body Dementia. Mary was born in a house in Lead, South Dakota on January 3, 1940, during a blizzard. Her family moved 2 years later to Milwaukie, Oregon. There Mary was surrounded by many aunts, uncles, and over 50 cousins. She was the majorette at Milwaukie High School. When Mary was 16, she moved to San Diego, where she graduated from Point Loma High School. A few months later, at a ballroom dancing class at San Diego City College, she met Joe. They were soon engaged. Mary often told the story that they went to the movie South Pacific, and then Joe proposed next to the monkey cages at the San Diego Zoo. Joe and Mary were married on November 27, 1959. Mary worked at Kettenberg Boat Works while Joe studied to get his Engineering degree at SDSU. Joe and Mary’s first son, Jay, was born in 1963, followed by Glenn in 1965. They were very involved in Palisades Presbyterian Church and enjoyed many fun adventures with other young families. In 1974, the family of four moved to Santa Barbara. They became members of Grace Church, where the Gechters made more lifelong friends. They were quite surprised in December of 1975 when twin girls arrived! When Jan and Jean were born, the pastor told the church congregation, “Mary and Joseph just had twins!” Mary was actively involved in her children's classrooms and sports activities, often serving as room mother, field trip driver, and team mom. She was also president of the Santa Barbara Chapter of the Mothers of Twins Club and was a Sunday School teacher for many years. Mary was more than a mother to just her four biological children. Friends, relatives, and international students fondly remember Mary as their “second mom or grandmother.” The doors of the Gechter home were always open and the house was regularly full of teenagers and young adults playing pool, stopping by before they went to the beach, or joining family meals. Mary greatly enjoyed being a grandmother and aunt. She would spend hours playing with the children, singing to them, or rocking them to sleep. Mary always loved to crack a joke, tell a detailed story from her past, breakout into song, or listen as one of her kids told an anecdote from their childhood. Mary’s favorite treats were Queen Anne cordial cherries and when Joe would bring her a burger from In and Out. She loved pink carnations, and she enjoyed watching the hummingbirds visit outside her window. She is survived by her husband of 61 years, Joe Gechter; her brother, Timothy Wright; her four children and their spouses, Jay and Rosie Gechter, Glenn and Sara Gechter, Matthew and Jan Mussallem, and Nathan and Jean Jorden; her seven grandchildren, Beverly, Hannah, Rebecca, Josiah, Tyler, Connor and Andrew; and countless other family and friends who called her Mom, Aunt, or Grandma. Mary is preceded in death by her sister, Lois (Wright) Grooman, and parents John and Rhoda Wright. A small private celebration of Mary’s life will be held on the Grace Hall patio at Shoreline Community Church on 2/6/21 at 12:00 pm PST. Due to the limited size of the memorial service, please join us live via Zoom at: https://us02web.zoom.us/j/82570213183 Meeting ID: 825 7021 3183 Find your local number: https://us02web.zoom.us/u/kdT3xEsaTJ We invite you to leave a message, memory, pictures, or a video for the family on this site on Mary's obituary tribute wall. The Gechter family would like to extend our heartfelt gratitude to the staff of Valle Verde for making Mary feel a part of your family, as she did for so many others in her life. In lieu of flowers, please consider donating to the Valle Verde Employee Appreciation Fund at: https://www.humangoodfoundation.org/ways-to-give/make-a-gift/. Please designate “Valle Verde” and “Employee Assistance” to honor the staff that gave Mary such exceptional care.

It is with heavy hearts we share that Mary Louise Wright Gechter went to her heavenly home on January 24, 2021 after a recent diagnosis of Lymphoma and a longer battle with Lewy Body Dementia. Mary was born in a house in Lead, South Dakota... View Obituary & Service Information

The family of Mary Louise Gechter created this Life Tributes page to make it easy to share your memories.

It is with heavy hearts we share that Mary Louise Wright Gechter...