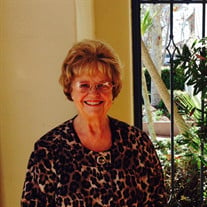 POULIOT, Mary Sue Mary Sue passed away peacefully on the evening of July 7, 2016, at the age of 83 while surrounded by loved ones at Serenity House in Santa Barbara, California. Born on December 23, 1932 in Moberly, Missouri, Mary Sue was the only child of Lawrence and Nina Fleming. Raised in Escanaba, Michigan, Mary Sue was an academic with a penchant for both the spoken and written word. In 1951, she graduated with honors from Escanaba High School, where she was the assistant editor of The Escanaban, a member of the National Honor Society , and was the Peninsula high school debate champion. Mary Sue was a proud alumna of the University of Michigan from where she received a four - year academic scholarship. Before graduating in 1955 with a Bachelor of Arts degree, she was the vice president of Zeta Phi Eta--the university's honorary school of speech sorority--the vice president of Alpha Chi Omega sorority, and the casting director of U-M TV. She began her career in Chicago as the talent counselor at Talent Inc, a leading agency of its time, and worked alongside TV and radio hopefuls such as Rock Hudson, and many other top talents of the era. Upon her return to Escanaba in 1958 for her new role at the Daily Press Radio Station, WLST, she met the love of her life, Donald Pouliot. The two would soon marry on August 22, 1959 and eventually make their way to Santa Barbara, where they raised their four children, Douglas, Stuart, Lynne, and Matthew. Mary Sue would continue to work until the final months of her life as the marketing director of The Towbes Group. Our family would like to express great thanks to The Towbes Group and those who surrounded her for not only allowing her the opportunity to express her creativity but to also fulfill her passion as a respected individual who made a difference in her community for more than 30 years. Remembered as a woman of great tenacity and ambition, she leaves behind her husband of 56 years, Donald, her children, Douglas (Elizabeth), Stuart, Lynne (Chip), Matthew (Mary), and her five grandchildren Megan, Lauren, Chase, Brock, and Katie. A rosary will be held on Wednesday, July 13, at 7pm at Welch-Ryce-Haider Funeral Chapel in Goleta. A funeral mass will be held on Thursday, July 14, at 10am at Saint Rafael’s Catholic Church with a reception to follow the La Cumbre Country Club. Please note, private country club attire is required and does not permit denim of any color.

POULIOT, Mary Sue Mary Sue passed away peacefully on the evening of July 7, 2016, at the age of 83 while surrounded by loved ones at Serenity House in Santa Barbara, California. Born on December 23, 1932 in Moberly, Missouri, Mary Sue was the... View Obituary & Service Information

The family of Mary Sue Margaret Pouliot created this Life Tributes page to make it easy to share your memories.