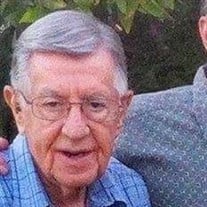 Michael Stanley Simmons, 85 of Santa Barbara, peacefully passed away from pneumonia on June 13, 2019. Mike was born to parents Carl and Lola (Todisco) Simmons on June 8, 1934 in Fresno. Mike graduated from Cal Poly San Luis Obispo in 1958. He pursued a lifetime career in Soil Conservation for the US Federal Government working for over 30 years, retiring in 1993. He continued his passion for soil conservation as an Engineering Consultant until he closed his office July 2017 at age 83. Mike met the love of his life, Janice Lakin at the Chowchilla County Fair. They were married on June 24, 1956 in Chowchilla. A few years later, Mike and Janice moved their family to Goleta and quickly fell in love with the people and the surrounding area. Mike was a passionate man who loved his family, his career, and the 49ers. For over 40 years, Mike played a major role in the growth of the Santa Barbara Zoo and served as president of the Zoo Foundation for two years. He was active with the Santa Barbara Jaycees, and also held leadership positions with the Boys Scouts of America who presented him with the Silver Beaver Award acknowledging his leadership roles. Mike is survived by his loving wife of 63 years, Janice. Mike is survived by his four children whom he loved very much, Michele and (David) Galletly of Midland, Texas, Joyce and (Greg) Fuss of Pacific Palisades, Kathy and (David) Bacon of Camarillo, and Michael Simmons of Santa Barbara. Mike will be missed by his loving grandchildren, Robert Galletly, Lauren Galletly, Daniel Fuss, Bryan and Emily Bacon, Jason Bacon, Courtney Bacon, and Kristy Jacobs. The memorial service will be held on Friday, June 28, 2019 at 11:00am at St. Mark United Methodist Church, 3942 La Colina Rd., Santa Barbara.

The family of Michael Stanley Simmons created this Life Tributes page to make it easy to share your memories.