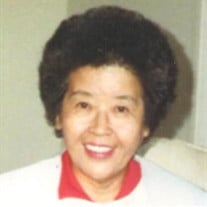 Dr. Nancy Ling Lee passed away on January 9, 2020, at Cottage Hospital in Santa Barbara. Nancy was born in Beijing, China, in 1930. She was the third of 3 children. The Sino-Japanese War broke out in 1932, and her family moved several times, fleeing the Japanese.When she was 17, her parents sent her and her brothers, Morris and Gilbert to the United States for their safety during the Communist takeover. She and Gilbert remained in the U.S, while Morris eventually returned to China. In the U.S., she attended St. Mary's, a Catholic girls' school in Wichita, Kansas. In 1950, she graduated Cum Laude from St. Mary's with a Bachelor of Arts degree. Not long after her graduation, while working at St. Joseph's hospital, she met and married Leon Lee. Two years later, after the birth of their first child, James, the family relocated to Zanesville, Ohio. Nancy worked as a lab technician at the Good Samaritan Hospital in Zanesville while Leon began the first Chinese restaurant in their new town. Nancy was a bacteriologist, and until 1960, was doing research at Ohio State University in Columbus. Following that she went to University of Pittsburg, some 4 hours away. She was one of 7 in a graduate program, and was the first of them to get her PH.D. in 1962. At the time, that was unheard of for an Asian woman. In Zanesville, Jennifer and Joy were born, the second and third of Nancy’s children, respectively. In 1965, she took a position offered by her mentor at the University of California, Santa Barbara. Nancy and her family moved to Santa Barbara and purchased a new home. Leon pursued business opportunities, including a new restaurant. Nancy worked tirelessly, and in 1970, was the only one of several candidates to be granted tenure as an associate professor. Later, she was promoted to full professor. In 1976, Nancy and Leon divorced. During her tenure at UCSB, Nancy was well recognized in the scientific community for her contributions in research, while attending scientific symposiums, mentoring graduate students and performing grant reviews. In the 1990’s, Nancy took retirement and enjoyed other activities, such as painting, house remodeling, and many other projects. Her interests included ballet, music, and playing classical piano. She also built an entire cat house, for the cats she so dearly loved. As a social hobby, she also enjoyed an occasional game of the traditional Chinese game of mahjong. Nancy would live in Santa Barbara for more than 50 years. Nancy lived most of her life in the U.S., but always remained deeply Chinese as well. She spoke 3 dialects of Chinese. She always lived her life with the highest standards, and strived to embody the best of both cultures. However, she never lost sight of kindness, compassion or humanitarianism. Nancy always had a wisdom about her, and projected calm to those around her. Few seemed to match Nancy's intelligence, integrity, sensitivity, and equanimity. She was gracious, resilient and patient, liked and respected by all, and excelled at most anything she set her mind to. A perfectionist by nature, she was also traditional, yet an open minded and progressive thinker. Nancy was ever a pillar of strength, and family was always very important to her. She would invariably do what she could to help others, especially her family. All around, she was inspirational and exceptional, yet modest. She was a wonderfully positive force in all whose lives she touched, and will forever be lovingly remembered.

Dr. Nancy Ling Lee passed away on January 9, 2020, at Cottage Hospital in Santa Barbara. Nancy was born in Beijing, China, in 1930. She was the third of 3 children. The Sino-Japanese War broke out in 1932, and her family moved several times,... View Obituary & Service Information

The family of Dr. Nancy Ling Lee created this Life Tributes page to make it easy to share your memories.