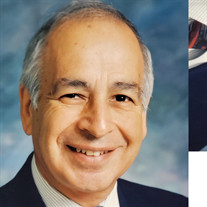 Oswald J. (John) Moreno was born to Salvador Moreno and Margaret Castelo in Ventura California on November 19, 1930. Sadly Salvador perished several months before John was born. His mother Margaret later married Mauro Bonilla who raised him and his five siblings.The family moved to Goleta when John was 8. He attended Goleta Union School. Later, attending Santa Barbara Junior High and Santa Barbara High School where John was a Seal Bearer and a member of the Honor Society, John was very active in sports, participating in basketball, football and track. John graduated SBHS in June 1948 with Honors and attended UCSB when the campus was on the Riviera. In 1951 John met Olive Motz, and they fell in love. John transferred to the University of California San Francisco to attend Pharmacy School. In June of 1952 John and Olive were married in San Francisco. They welcomed their first child Salvador Michael in July of 1953. In June of 1954, while John was serving his Army Reserve duties, they were blessed with a second child, a girl Clarissa Margaret. John graduated from UCSF Pharmacy School in 1955. John was a member of the ROTC during college and while attending UCSF he was commissioned a Second Lieutenant in the Army Reserve. During the summer of 1956 John was assigned temporary duty at Fort Sam Houston in San Antonio, Texas. A third child, Daniel Joseph was born in July of 1956 while the family was in Texas. In October of 1956, the family returned to Santa Barbara. As a young pharmacist John worked for Thrifty Drug Company. In September of 1959, the growing Moreno family was blessed with their fourth child, Patricia Ann. In 1960, John began working at Brown’s Pharmacy on upper State Street. It was at this time that he was invited to join the Rotary Club of Santa Barbara North. John was elected President of the club in May 1960. He was very proud of his membership in the club and received many honors as the club’s longest active member. In June of 1961 the Moreno Family welcomed their fifth child, Andrea Marie. In the early 1960’s John purchased Brown’s Pharmacy. In September of 1963, John and Olive welcomed their sixth child Philip John to their growing family. With the birth of their seventh child in November of 1964, Veronica Louise, the family moved to their present home in the beautiful Mission Canyon area. The family continued to grow and in April of 1966 John and Olive welcomed their eighth child Rebeca Cecelia. July of 1967 brought their ninth child and fourth son Charles Anthony. John loved being a Pharmacist and always had a smile on his face no matter how busy he was. He had many colleagues and made many friends during his long and successful career until he finally retired at the age of 84 from Costco. John remained active in the Rotary Club, the Nights of Columbus and the Boy Scouts. He was a volunteer at the YMCA for 30 years and led the Fit for Life class during his time there. He enjoyed camping with his family and took his children on many hiking and camping trips in the High Sierras. He enjoyed acting with the Chicano Theater group, especially in the annual Christmas show “Una Pastorela". John and Olive enjoyed traveling. They took many pleasant trips and tours to Mexico, Central America, South America, Europe and Eastern Europe. Oswald (John) was predeceased by his father Salvador Moreno, his stepfather Mauro and mother Margaret Bonilla, his brother Salvador and sister Alvina. He is survived by his beloved wife of 66 years Olive, his nine children Salvador, Clarissa, Daniel, Patricia, Andrea, Philip, Veronica, Rebeca, and Charles. His younger brother William, sisters Teresa and Margaret,18 grandchildren, 6 great grandchildren and many beloved nephews and nieces. Rosary services will be at Welch-Ryce Haider funeral home May 1st 7PM. Then a funeral Mass at the Old Mission Santa Barbara on May 2nd at 10 am with grave site service at Calvary Cemetery to follow.

The family of Oswald John Moreno created this Life Tributes page to make it easy to share your memories.