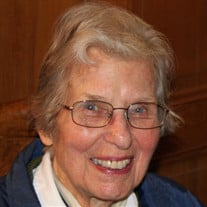 Patricia Latham, a lifelong resident of Carpinteria and Santa Barbara, died surrounded by her family on February 14 after a short illness. Pat was born in Santa Barbara, the eldest child of Ina and Marc Latham, who had relocated to the area from Oregon to work in the lumber business here. The family moved to Carpinteria in 1930 after Marc opened the Carpinteria Valley Lumber Company, and they welcomed son Robert that same year. Pat attended elementary and high school in Carpinteria and went to Oregon State University; after graduating, she returned to California and earned a teaching credential in primary education. She worked in the San Francisco Bay Area for two years and then accepted a position in the Goleta Union School District, teaching elementary school there for 20 years. Upon retirement she moved back to the family home in Carpinteria, where she resided for the remainder of her life. A woman of strong social conscience, Pat supported many local and national agencies that educate the young, provide aid to underserved communities, and protect the environment, among them Direct Relief, Habitat for Humanity, Planned Parenthood, the Nature Conservancy and the Scholarship Foundation of Santa Barbara. She also had an intense appreciation for the arts and supported community organizations such as Opera Santa Barbara, KUSC radio, and the Music Academy of the West. A voracious reader of literary and travel journals, she was an eager contributor to outreach and literacy efforts by the Friends of the Carpinteria Library. As much a student of life as a teacher, Pat enjoyed the experience of international travel and made several trips to Europe and Australia. She also loved the American Southwest and made many road trips there with friends in her 1967 Mustang, collecting artwork along the way. She was a regular visitor to the Bay Area to see her Aunt Elizabeth and cousins. For many years Pat was an avid genealogist, tracing her family history back to their New England origins in the Puritan era of the 17th century. Pat enjoyed sharing her enthusiasm for the past and served occasionally as docent at the Carpinteria Valley Historical Society. Pat was predeceased by her parents Ina and Marc Latham, her brother Robert Latham, and her beloved cat Ginkgo. She is survived by her nephew Van Latham, niece Ann Latham (Rossana), and sister-in-law Vera Bensen (Donald). A memorial service will be held at 2pm on April 1 at the Carpinteria Cemetery, to be followed by a reception at the family home. In lieu of flowers, donations may be made to a favorite organization.

Patricia Latham, a lifelong resident of Carpinteria and Santa Barbara, died surrounded by her family on February 14 after a short illness. Pat was born in Santa Barbara, the eldest child of Ina and Marc Latham, who had relocated to the area... View Obituary & Service Information

The family of Patricia A. Latham created this Life Tributes page to make it easy to share your memories.

Patricia Latham, a lifelong resident of Carpinteria and Santa...