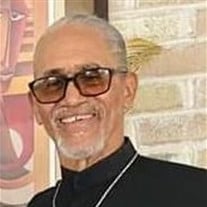 Percy Lee Johnson was born November 24, 1950 at Cottage Hospital, Santa Barbara, CA to James and Sudie Johnson. The third of six children, Percy was active in sports and his passion was football. He was a die-hard fan of the Oakland Raiders and Los Angeles Lakers. Percy attended Franklin Elementary School, Santa Barbara Junior High and graduated from Santa Barbara High School in 1968, where he played football. Percy received an athletic scholarship to Arizona State University but returned from Arizona and continued his education at Santa Barbara City College. He eventually transferred to Cal-State Hayward where he received his Bachelor of Arts in Education. While in Northern California, he taught in the Oakland elementary school system. Percy would return, once again, to his beloved Santa Barbara where he worked a variety of jobs and ultimately found his joy in working as a painter contractor - partnering with his closest friend, Billie Briley. Percy's fun-loving nature meant that he never met a stranger. He had a joyful personality, was always smiling, friendly, VERY funny, and willing to help anyone who needed, as has been noted by his neighbors and friends in the community. Percy loved to play dominoes with the "fellas" every Friday night, but most notably, Percy loved his family and adored his mother. Percy transitioned from this life on Wednesday, April 13, 2022 and was preceded in death by his father, James Johnson and his daughter, Tracy Blackmon. He is survived by his sons Kali Johnson (Irene) and Jamala Myres; his mother, Sudie Johnson; brothers, James (Irma) and Barnette (Theresa) and sisters, Patricia Johnson, Barbara Ford (Greg) and Sandra Johnson. He leaves to mourn his passing several grandchildren, great grandchildren, a host of nieces, nephews and other friends who cherished him deeply. Join the family on Saturday, June 11, 2022 at 2:00 pm for a celebratory memorial service at The Fraternal Order of Eagles, 923 Bath Street, Santa Barbara..

Percy Lee Johnson was born November 24, 1950 at Cottage Hospital, Santa Barbara, CA to James and Sudie Johnson. The third of six children, Percy was active in sports and his passion was football. He was a die-hard fan of the Oakland Raiders... View Obituary & Service Information

The family of Percy Lee Johnson created this Life Tributes page to make it easy to share your memories.