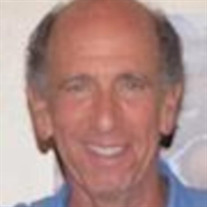 A hole opened in the universe on the morn-ing of February 15, 2021, when Dr. Peter Joseph Levy left his generous contributions to the world, for those of us lucky enough to have known him - to remember and to... View Obituary & Service Information

The family of Peter Joseph Levy created this Life Tributes page to make it easy to share your memories.

A hole opened in the universe on the morn-ing of February 15,...