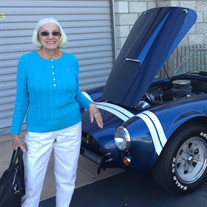 Rachel Chenail Silva, formerly of Wauregan, CT, died on November 8, 2021 at her home in in Santa Barbara, CA. She was born on November 15, 1934, the youngest child of George S. and Cora Baril Chenail, and was known locally as “Minnie” and in California affectionately as “Moon.“ A former Plainfield High School cheerleader, she remained physically active throughout her life. Rachel was an avid skier and taught her three sons to ski as well. She relished a hearty game of tennis, a leisurely fly-fishing expedition, and almost anything chocolate. Although born in a small town, Moon left soon after high school for the shores of Waikiki, HI, where her husband, Robert Silva, was stationed with the Navy. Her time in Hawaii fostered a life-long love of the beach and boogie boarding. She became a world traveler, and accompanied her husband on business trips to Australia, Europe, and Canada (where she proudly utilized her ability to speak French). Later in life, she spent winters in Palm Springs playing tennis and summers in Carlsbad at the beach. Rachel had a wide variety of hobbies. She was always on the lookout for antiques and thrift stores to score her “next deal” and was an avid collector of pewter and dolls and helped with the expansion of her husband’s pocket watch collection. Rachel learned to paint watercolors and oils and found time to volunteer at Meals on Wheels and as a Cub Scout Den Mother. She could sew up almost any pattern. She made everyone, especially teens and young adults - related or not - feel loved, fed and welcome in her home especially during the holidays. Moon is survived by her husband Robert, of 65 years whom she loved fully and completely, as well as her beloved sons, David (Elizabeth Pepin Silva), John (Shana Weiss) and Stephen (Swathi Desai-Silva), all of California, as well as their three grandsons, Jesse, Jake, and Joshua. She is also survived by her twin brother, Richard B. Chenail of Brooklyn, CT, her sisters-in-law Marlene Chenail, Joyce Chenail and Helen May, and numerous nieces and nephews. She was predeceased by her siblings, George E. Chenail, Olive Chenail, Jane Chenail Prairie, and Gerald Chenail.

The family of Rachel Chenail Silva created this Life Tributes page to make it easy to share your memories.