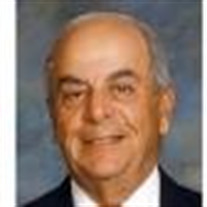 Richard Elias Arbagey was born in Duluth Minnesota to Sophie and Habib Arbagey on January 25, 1923. In 1926 his family moved to Santa Barbara where his father operated a Damascus Linen shop in the street of Spain in the Paseo Nuevo. After graduating from Santa Barbara High School, he started working at the White House of Santa Barbara men's clothing store. In 1942 he enlisted in the military, serving with the 11 th Air Force on the islands of Attu and Shemya. Upon discharge, he enrolled at the Woodbury College in Merchandising. With his degree, he returned to the White House and eventually became co-owner. The store was closed'42 years later in 1988. During his working years Richard was active in many organizations. As a member of the Jr. Chamber of Commerce he assisted in raising funds for the Santa Barbara Zoo and was awarded a Golden membership. He was past Commander of the American Legion Post 49, served as president of the Retail Merchants Association which later became the Downtown Organization. He also served on the Boards of the Santa Barbara Chamber of Commerce, Channel City Club, and the Santa Barbara Rotary Club where he received the Paul Harris Fellow Award. In addition he was a member of the El Pescatores, and president at one time of the following: The Santa Barbara Credit Bureau, University Club of Santa Barbara, and American Heart Association. Richard's greatest pastime love was being a member of the American Legion of Boy Scouts. As a member of troop 8, he earned the rank of Eagle Scout and was Chief of the Order of the Arrow and awarded the Vigil honor. He served over 60 years with the Boy Scouts and became President of the Mission Council receiving the Silver Beaver which is the highest award given to a volunteer by the Boy Scouts of America. IN 1984, THE SANTA BARBARA GREATER ADVERTISING FEDERATION NAMED HIM MAN OF THE YEAR. He had been living at Valle Verde since December 2014 of which appreciation is to be given especially to the staff of the Valle Verde Health Center. His loving wife, Rosita survives him as well as two-step daughters, Loie and Pita, their husbands, 5 grandchildren and one great grandchild. A celebration of life will be held June 25 at the University Club. For further information please e-mail: [email protected] Please donate to your favorite charity in lieu of flowers.

Richard Elias Arbagey was born in Duluth Minnesota to Sophie and Habib Arbagey on January 25, 1923. In 1926 his family moved to Santa Barbara where his father operated a Damascus Linen shop in the street of Spain in the Paseo Nuevo. After graduating... View Obituary & Service Information

The family of Richard Elias Arbagey created this Life Tributes page to make it easy to share your memories.

Richard Elias Arbagey was born in Duluth Minnesota to Sophie...