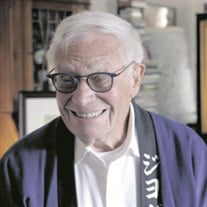 Richard E. Jorgensen, educator and author, a self-described kid from the Midwest who through a run of serendipity came to see himself as a citizen of the world, died at home in Santa Barbara of complications from pancreatic cancer. He was 92. Dick (as he was known to everyone) embodied American Exceptionalism. From his early years in Kenosha, WI, impacted by Pearl Harbor and the onset of WWII, Dick looked outside of his own life and demonstrated a life-long interest in everyone around him as well as those in other cultures. He had a curiosity about the larger world and America’s place in it.  Dick was a second-generation American, the son of immigrants from Denmark. He was born July 13, 1925, in Kenosha, WI. His sister, Jane, preceded Dick in death.     After serving at Great Lakes Naval Station during WWII, Dick attended Carleton College in Northfield, MN, with the help of the GI Bill, graduating in 1950. In 1954 he earned a master’s in history at the University of Michigan, and some years later (1972), a Ph.D. in history from Georgetown University. His thesis, The Honorable Bridge: An Historical Study of Japan’s Cultural Reputation in America, was completed in 1973.     In 1954, while at the University of Michigan, he was selected by The Committee for a Free Asia, now The Asia Foundation, to become a teacher ambassador in Japan. He fell madly in love with the people and the culture. He was posted to Hiroshima University ten years after it was bombed by the United States. He found the Japanese to be a people who respected their traditions and yet had a voracious desire for modernization. He believed he was able to break through to his students by inviting them to his apartment to listen to jazz. This was a halcyon time for Dick, who after his two-year teaching assignment took his first trip around the world, when he booked passage on a small steamer back to the United States through the Port of New York City.  After meeting his wife, Barbara Cook (a Carleton alumnus), in San Francisco on an elevator at the Asia Foundation building, the two lived in Berkeley, where they had two daughters (Susan and Anne). He claimed to have “never known up from down” since that famous elevator ride. He departed the Asia Foundation for Berkeley High School where he taught US History, followed by an assignment at UC Berkeley where he was a Trainer of History Teachers.  The couple moved to Washington, D.C., in 1966, where he worked for the Office of Education until 1980. During those years he was the national director of the Teacher Corps/Peace Corps program and director of dissemination for programs in foreign languages and international studies in America. He and Barbara moved to Northfield, MN, in 1980 so he could take the job of director of alumni relations at his beloved Carleton College. The couple moved back to D.C. in 1985 to their home in Cleveland Park. Barbara died in 2004. Dick remained in their large home, entertaining and lodging all comers until finally consenting to sell his home in 2014. At that point he joined his daughter Susan and her family in Santa Barbara, where he continued his active involvement in the Congregational Church.  In fulfillment of a long-time desire, Dick traveled back to Hiroshima in October 2017 and met with several of his former students, who are themselves in their eighties. His experience on this trip was yet further affirmation of the hospitality of his Japanese associates.     Dick is the author of two books: O Tomodachi: (Friend) (2015) and Yuko, Friendship Between Nations (2017). His third memoir is almost complete: American Sensei (Teacher). He was also very passionate about his fourth book, But Not for Lunch, which is a compilation of vignettes about his first thirty-plus years of amusing happenstances after retiring.   Dick is remembered very fondly by his four grandchildren; Sam and Isabel (Susan and David Dickinson, of Santa Barbara); and, Catherine (Xan) Vongsathorn and Amy (Anne and Peter Farkas of Fairfield, CT), to whom he was a consistent and caring presence. The recent birth of his first great-grandson, Owen Vongsathorn, was an occasion of great joy and delight for Dick.    Dick felt that his life’s successes were made possible by a curious and accepting society that led by example and enfolded others without prejudice. He remained positive about the quality of the American people and deeply grateful for all of the opportunities he was afforded.   Service information may be found through Welch-Ryce-Haider Funeral Chapel: http://www.wrhsb.com  In lieu of flowers, gifts can be made to Friends of Los Banos del Mar Pool, P.O. Box 91622, Santa Barbara, CA 93190 or Fairfield Public Library, ATTN: Helene Murtha, 1080 Old Post Rd, Fairfield, CT 06824.   For West Coast family and friends, a "Celebration of Life" will be held on Saturday, July 14, 2018 in Santa Barbara. Please email Susan for directions at, "[email protected]” For East Coast family and friends, there will be a “Celebration of Life” on Saturday, October 6, 2018 at the Cleveland Park Congregational Church, 3400 Lowell St, NW, Washington, DC 20016. The service will start at 1:00 pm with a reception from 2-4:00 pm in the church parlor.

Richard E. Jorgensen, educator and author, a self-described kid from the Midwest who through a run of serendipity came to see himself as a citizen of the world, died at home in Santa Barbara of complications from pancreatic cancer. He was 92. Dick... View Obituary & Service Information

The family of Richard E. Jorgensen created this Life Tributes page to make it easy to share your memories.