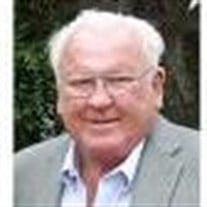 Robert (Bob) Edward Rowe passed away on June 4, 2017 after a brief illness. He was born May 7, 1943, in Los Angeles, to Robert P and Dorothy Rowe (Krell). In 1945 the family moved to Santa Barbara. Bob enjoyed growing up in Santa Barbara on the family's ranch. He loved to recount stories about his wonderful ranch and 4-H adventures. He was proud to be a graduate of the 1961 Class of Bishop Garcia Diego High School ? to this day "the most partying class." Bob served in the Air Force between 1961 and 1967. Requesting a foreign assignment so that he and his then wife Linda (Veley) could see the world, Bob was stationed at Vandenberg Air Force Base! He did eventually get transferred and served in both northern and southern Spain. Bob and Linda came back to Santa Barbara to attend SB City College. They later moved to San Francisco where Bob received his master's in Business Administration from Golden Gate University, in 1972. They divorced in 1982. Bob retired from the Federal Reserve and moved back to Santa Barbara in 1985 where he married Patsy Cochran. After Patsy's passing, in 1988, Bob moved to Port Angeles, Washington. In 1991, Bob moved back to Santa Barbara and married Beth Reneau (Flodquist). At the age of 65, Bob obtained his pilot's license so that he would be able to fly the plane he built with a dear friend. When not traveling and sampling the local cuisine Bob enjoyed growing his own fruits and vegetables, cooking and photography. Bob was gracious, caring and giving and made those around him feel special. To know him was to love him. Bob will be missed by his wife Beth, his brother John and John's wife Ruth Rowe (Heinmiller), and many sisters and brothers in law, stepsons, nieces, nephews, grandsons, grand- nieces and grand-nephews. Arrangements are being provided by Welch-Ryce-Haider. A celebration of his life will take place at First Congregational Church, 2101 State Street, Santa Barbara, on June 23rd at 2pm.

Robert (Bob) Edward Rowe passed away on June 4, 2017 after a brief illness. He was born May 7, 1943, in Los Angeles, to Robert P and Dorothy Rowe (Krell). In 1945 the family moved to Santa Barbara. Bob enjoyed growing up in Santa Barbara on... View Obituary & Service Information

The family of Robert EDward Rowe created this Life Tributes page to make it easy to share your memories.