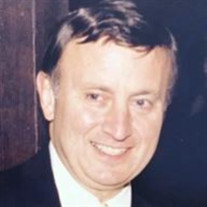 Robert Louis “Bob” Stevens was born in 1934 in Hornell, N.Y. to Murray Stevens and Helen Damrath. His father, Murray, opened his eponymous Army-Navy clothing store in 1920 after moving to Hornell from New York City. Bob met his future wife, Sue Spalding, while attending Hornell High School. After graduating high school in 1952, he studied at the Wharton School of Economics at the University of Pennsylvania and graduated with a BS in Economics in 1956. Bob then joined the Air Force as a Second Lieutenant based at Ethan Allen Air Force Base in Burlington, VT. He served two years and then attended the University of Pittsburgh, where he obtained his MBA in 1960. Bob married Sue Spalding in 1960 in Hornell, and they raised four children in nearby Arkport. Bob took over management of the Murray Stevens clothing store for the next 27 years and was an active leader of Hornell, serving as President of the Rotary Club and Treasurer of the Hornell Industrial Development Agency. Bob and Sue later moved to Santa Barbara in 1987 and he began his second career as a real estate agent with Steve Schmidt & Co., later moving over to ReMax, Harbor View, and Sun Coast. He also continued his lifelong service as a Rotarian with the Rotary Club of Goleta and was president from 1993-94. Bob passed away peacefully at home of natural causes and is survived by his wife, Sue, four children, Elizabeth, Kelly, William, and Robert, and seven grandchildren. Calling hours will be held on March 10 from 1-3pm at the Welch-Ryce-Haider Funeral Chapel at 450 Ward Drive in Goleta. In lieu of flowers, you may send a donation to the Rotary Club of Goleta, PO Box 51, Goleta, CA 93116.

The family of Robert Louis Stevens created this Life Tributes page to make it easy to share your memories.