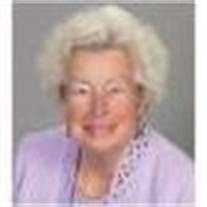 Ruth Brooks Scollin, a long time resident of Santa Barbara, died at her home on July 17, 2017 at the age of 85. She died peacefully surrounded by family. Ruth was born in 1932 in Swampscott, Massachusetts to Paul and Dorothy Brooks. In her youth Ruth grew up in Saugus, Massachusetts and was active in the 4-H Service Club and played clarinet in the Saugus High School Band. She received her Bachelor of Science and Registered Nurse degrees in 1954 from Simmons College in Boston, Massachusetts and married Harold (Pete) Vincent Scollin, Jr. that same year at Newton Lower Falls, Massachusetts. The married couple subsequently moved across the United States and settled in Santa Barbara, California. Ruth worked initially as a registered nurse in a local urologist's office and then, after the birth of her children, became the assistant director at the Oaks Parent-Child Workshop. She was assistant director for 14 years. She later worked part-time as an owner at Channel Paper Company with her husband until the sale of the business in 1998. Ruth was active for many years in the Santa Barbara Historical Society and served as president for two years in 1999 and 2000. She was also a pioneer and librarian for many years for the Santa Barbara County Genealogical Society and co-chair of the capital campaign of the Sahyun Library. She was an elder and trustee of the First Presbyterian Church of Santa Barbara and was instrumental in starting the Early Childcare Center. She was active in the Rotary Club of Santa Barbara and was a Paul Harris Fellow in that organization. She also volunteered for Recording for the Blind and Dyslexic. Ruth had many hobbies and interests. She researched the family genealogy extensively and documented her research meticulously. She enjoyed stamp collecting and spent many hours doing jigsaw puzzles and crossword puzzles. In her later years she actually wore out numerous decks of cards playing solitaire. She was a very good dancer and would occasionally entertain the family with an impromptu interpretive dance. For a while she was a prolific knitter and most all of her family received a creative sweater or two. She had two grandchildren living in Santa Barbara and two in Redwood Valley, California and she took it on herself to spend a few weeks every summer getting all the grandkids together in one place so they would become close friends and build lasting relationships. That bond persists to this day. She was a staunch New Englander and loved east coast faire like fried clams and lobster - she taught the family how to get every lobster morsel out of even the tiniest leg of the delicious critters. She loved spending time with her family and regularly went out to lunch and celebrated holidays with her extended family. Her family loved spending time with her. Ruth was preceded in death by her husband Harold (Pete) Scollin, Jr., brother Paul Brooks, sister Barbara Lovell and brother Frederick Brooks. She is survived by her son David Scollin and his wife Christy, son Bruce Scollin and his wife Barbara, daughter Laura Scollin Uhrig, son Wayne Scollin and his wife Ann; her grandchildren Sean Scollin and his wife Chayada, Kyle Scollin and his fiancée Josephine, Brooks Uhrig and his wife Samantha, and Bryce Uhrig and his wife Kelly; her great-grandchildren Nisara Scollin and Adaline Uhrig. The family would like to thank all the wonderful caregivers who attended to Ruth and made it possible for her to stay in her own home the last year of her life. Ruth's memorial service will be held at 11:00 AM on Saturday, July 29, 2017 at the First Presbyterian Church, 21 East Constance Ave, Santa Barbara. There will be a reception immediately following the service in the Fellowship Hall at the First Presbyterian Church. In lieu of flowers, donations can be made to the First Presbyterian Church Early Childhood Center or the charity of your choice.

Ruth Brooks Scollin, a long time resident of Santa Barbara, died at her home on July 17, 2017 at the age of 85. She died peacefully surrounded by family. Ruth was born in 1932 in Swampscott, Massachusetts to Paul and Dorothy Brooks. In her... View Obituary & Service Information

The family of Ruth Brooks Scollin created this Life Tributes page to make it easy to share your memories.