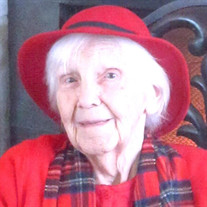 Ruth Anne Tapper passed away peacefully on April 20th at the age of 96. She was born in Weeping Water Nebraska to Edward and Annie Steinkamp, the first of four children. She grew up on the family farm, the traditional II Farmer's daughter". Mom was always very clear that she wanted a career in an age when it wasn't the common path for a woman. She spent a year as a Teacher in a country one-room school house before she decided to follow her heart and become a nurse. She became a member of the U.S. Cadet Nurse Corps during World War II. In early 1943 she met the love of her life, Carl Tapper. Carl and Ruth Anne were married on November 21, 1943 in the first wedding ever held at the Bryan Memorial Nurses' Home. After the War, they moved to California eventually settling in Santa Barbara to raise their family. The three children, Carl (Salty), Billie and Kent were blessed with a happy childhood and wonderful parents. Ruth worked as a R.N. for over 20 years at Santa Barbara General Hospital ending her career as head nurse in the Emergency Room. Mom was a genuinely kind, good person--everybody liked her! She was a loving, caring, compassionate wife, mother and friend. She loved reading, her cats Spunky and Samantha (and all the other precious pets in her life), playing Bingo at the Goleta Senior Center, sweet potato fries, watching football (especially Nebraska and her beloved Raiders), and most of all, being with family. She was a member of The Santa Barbara Genealogical Society, St. Andrews Presbyterian Church, and was one of the earliest members of the Santa Barbara Chapter of the Audubon Society. Ruth Anne was preceded in death by her husband Carl, her son Kent, and her brother Dale. She is survived by her son Carl "Salty" Tapper (Kelly), daughter Billie Olson (with Barry), daughter-law Janice Tapper, grandchildren Troy Olson, Roxanne Tapper, Carl "Ric" Tapper, Ryan Williams (Erica), her sisters Shirley Durham and Wanda Gardner, and many nieces and nephews. The family wishes to give heartfelt thanks to all the wonderful people of Sarah House, especially to her daily tender, loving caregivers Mary and Leanne. Many thanks also to the Dream Foundation for the lovely bird paradise that gave such joy and comfort. No services are planned.

Ruth Anne Tapper passed away peacefully on April 20th at the age of 96. She was born in Weeping Water Nebraska to Edward and Annie Steinkamp, the first of four children. She grew up on the family farm, the traditional II Farmer's daughter".... View Obituary & Service Information

The family of Ruth Anne Tapper created this Life Tributes page to make it easy to share your memories.

Ruth Anne Tapper passed away peacefully on April 20th at the...