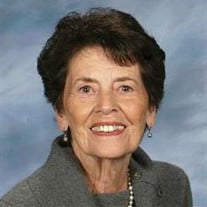 Shirley Mae Horton, age 89, a longtime resident of the Santa Barbara community, passed away on Thursday July 5th at Samarkand’s Smith Health Care Facility. She is preceded in death by her loving husband, Dr. Robert R. Horton after 55 years of marriage. She is survived by her three children, Gary Horton (son Robert Ross Horton II), Leslie Horton (partner Jeanie Cohen and daughter Erin Tarnoff), and Amy Horton (husband Richard Steingard and daughter Jordan Steingard and son Charles Steingard). She is survived by sisters Mary Ann Burch, Marlene Loven, Barbara Gunderson and brothers William Paulson and Thomas Paulson. Shirley Horton was born and raised in St. Paul, Minnesota, the first child of Lawrence W. Paulson and Vera A. Carlson. She was a devoted big sister to her 7 younger siblings. She met her future husband in 1949 while a college student at the University of Minnesota studying art and working part time at Charles Miller Hospital in St. Paul. As the story goes he was a dashing intern dressed in white and it was love at first sight. They moved to Vallejo, California and Bremerton, Washington where he served in the US Navy Medical Corp. After living in Algona, Iowa and St. Paul, Minnesota, they decided to head west with their three children to California and fortuitously decided to settle in Santa Barbara in 1965. Shirley quickly became an avid member of the community, involved in art, volunteering, and church activities. Shirley was an established member of Santa Barbara’s First United Methodist Church and participated in many of the church's outreach programs. She was on the board of the Cynthia Ann Morrow Student Drop-In Center, a tutoring and after school program for youth in the community. She also was a beloved member of the Women of Spirit group, having been its bible study leader for many years. She also was an active member of the PEO Sisterhood, a philanthropy group promoting educational opportunities for women. She was a beloved mother and grandmother, sending hand-written cards for every holiday and birthday, always finding that unique and sentimental gift, and of course her hours of baking for and with all of her grandkids. She was a trend setter, embracing people from other cultures, an early devotee of mid-century modernism, and a loyal friend and mentor to many in the Santa Barbara community. Everyone who knew her was struck by the kindness of her heart, the generosity of her spirit, her openness to others, and her devotion to her family. A memorial service to celebrate Shirley Horton’s life with be held at 2 pm on Saturday July 21st at the Santa Barbara First United Methodist Church at the corner of Anapamu and Garden Streets. She, and her husband, had been active members of the congregation for many years. Therefore, in lieu of flowers, any donations may be made to the First United Methodist Church for special projects or charities of one’s choice. Welch-Ryce-Haider is in charge of arrangements.

The family of Shirley Mae Horton created this Life Tributes page to make it easy to share your memories.

Shirley Mae Horton, age 89, a longtime resident of the Santa...