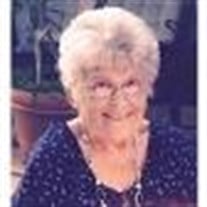 Shirley Elizabeth Robles (Sanchez), a lifelong resident of Santa Barbara passed away peacefully on October 23, 2018. Born in Santa Barbara on April 6, 1935, to Helen (Bigelow) and Arthur Sanchez, owner of Sanchez Bakery. Shirley grew up in the Westside on Mountain Avenue, enjoying childhood games and neighborhood gatherings. She attended Dolores Grammar School, Santa Barbara Junior High School and Santa Barbara High School ('53). After high school, Shirley was employed at the Santa Barbara County National Bank. Then, she began work at the Santa Barbara High School Admissions Office, where she met her future husband, Reginald (Reggie) A. Robles. Following a school board meeting and over a cup of coffee, they decided to "go together" and went together evermore. On June 14, 1959, they married at Our Lady of Sorrows Church in Santa Barbara. Together they raised two sons. Shirley was a devoted mother, who built a loving family and lovely home life. Later, she worked at Glenda's Party Cove at La Cumbre Plaza and in the accounts payable department at the University of California, Santa Barbara. Shirley was actively involved in the St. Raphael's Catholic School and Bishop Garcia Diego High School communities, as a parent and grandparent. Along with her husband, she volunteered for countless school and athletic events throughout the years. She was an ardent supporter of the Bishop Diego Cardinals and every football season could be seen enthusiastically rooting for the home team. She was also involved with the Daughters of Spain. As a mother, she was overjoyed by the lives her sons created, Steven a retired Santa Barbara Police Officer and Michael the Director of Sports Information and Communications at the California Community College Athletic Association and previously University of California, Davis. Shirley was a devoted grandmother, who loved and adored her grandchildren - Meghan, McKenna, Isabela and Ivan. She relished in her family's successes and supported their every desire. As a native Santa Barbaran, she enjoyed all of the town's festivals and festivities. Both Shirley and Reggie were spectators at every parade and celebration. She cherished time with her family, orchestrating holiday meals, and creating gifts or crafts for family and friends. Always tooling around town and visiting her usual spots filled her days with joy and belonging. Shirley's sense of humor induced hilarity, produced memories, and kept everyone laughing. Her enormous heart, overfilled with kindness and affection, gave her the instinctive capability to continuously give to others. She lived a long life fueled by her enduring strength and resilience. Shirley also loved all of her dogs through the years, especially her most recent dogs, Shadow and Sammy. Shirley is survived by her sons Steven Robles of Santa Barbara, and Michael Robles(Linda) of Sacramento, her grandchildren Meghan Robles, McKenna Robles, Isabela Petraitis-Robles, and Ivan Robles. She also leaves behind many nieces and nephews and their families, as well as her dear friend, Linda Bregante. She was preceded in death by her parents and her husband. Shirley and Reggie are now joyfully reunited in the brilliance and majesty of heaven. Her family would like to thank the many doctors and nurses that aided her throughout her life, particularly Dr. David Birken. They would also like to thank her "extended families" at Rose Café, Fresco Café and everyone that helped her around her home with her daily chores. In lieu of flowers, donations can be made to St. Raphael's Catholic School or Bishop Garcia Diego High School.

Shirley Elizabeth Robles (Sanchez), a lifelong resident of Santa Barbara passed away peacefully on October 23, 2018. Born in Santa Barbara on April 6, 1935, to Helen (Bigelow) and Arthur Sanchez, owner of Sanchez Bakery. Shirley grew up in the... View Obituary & Service Information

The family of Shirley Elizabeth Robles created this Life Tributes page to make it easy to share your memories.