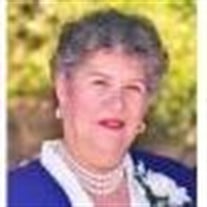 May 29, 1934 - January 14, 2017 Soledad Sanchez De La Mora was born on May 29, 1934, in San Jose de Gracia, Jalisco. She was the daughter of Candelario and Jovita Sanchez. She was the eldest of 8 children and always helped care for her siblings. She grew up on a farm where she learned the true value of hard work. When she was 20 years old she met Salvador Barba De La Mora and they were married on August 28, 1955 in Tepatitlán, Jalisco. A year later they had their first son, Carlos, who sadly, died after only six months of life. This tragedy impelled her husband, Salvador, to seek work in the United States. In September of 1962, Soledad and her three small children joined him and emigrated to Santa Barbara, California. Soon her family grew to three sons and three daughters. Over the years, she consistently sacrificed her own personal preferences to focus instead on raising a God fearing family who worked together, dreamed together, fought together, and succeeded together. She was a loyal wife who tirelessly stood beside her husband's dream and never wavered in her support of him. Working alongside with him while unashamedly sharing her opinions. They modeled teamwork, sacrificial love, and relentless parenting. She was an unending source of practical wisdom. Though her words in English were few, she had her own form of communication that perfectly conveyed her unfiltered, honest perspective with undeniable love. She was the true gardener in the family and her home was a source of pride and joy. Every seed she planted blossomed even through the drought. She lived a simple life preferring to remain anonymous and in the background rather than front and center. She was also a very generous woman and never let her left hand know what her right hand was doing. Her devotion to God and tradition were unmatched and she made sure to inculcate these values in her family. She loved watching her grown children and their families thrive. She devoted the last 11 years of her life caring for her beloved husband who preceded her in death after 60 years of marriage. She is survived by her six children: Yolanda Ruiz, Salvador De La Mora Jr., Maria Avila, Joel De La Mora, Martha Ruiz and Sergio De La Mora. In addition to her children, Soledad entrusts her legacy to 20 grandchildren and 14 great-grandchildren. Our mother unexpectedly passed away on Saturday, January 14, 2017. We love our mom and we will deeply miss her. In the countless lives of those who have been touched and impacted by our mother Soledad, she will be remembered and cherished until we are reunited with her again. All are welcome in celebrating the life of Soledad Sanchez De La Mora on January 24th at 10am Mass at Our Lady of Sorrows at 21 East Sola Street, Santa Barbara, CA followed by a burial service at Calvary Cemetery located at 199 North Hope Avenue, Santa Barbara, CA 93110.

May 29, 1934 - January 14, 2017 Soledad Sanchez De La Mora was born on May 29, 1934, in San Jose de Gracia, Jalisco. She was the daughter of Candelario and Jovita Sanchez. She was the eldest of 8 children and always helped care for her siblings.... View Obituary & Service Information

The family of Soleded Sanchez De La Mora created this Life Tributes page to make it easy to share your memories.