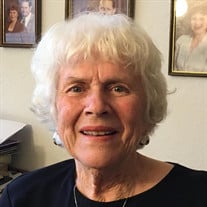 SUZANNE E. ROBERTS “The most beautiful word on the lips of mankind is the word “Mother,” and the most beautiful call is the call of “My mother.” It is a word full of hope and love, a sweet and kind word coming from the depths of the heart. The mother is everything – she is our consolation in sorrow, our hope in misery, and our strength in weakness. She is the source of love, mercy, sympathy, and forgiveness. He who loses his mother loses a pure soul who blesses and guards him constantly.” • Kahlil Gibran Suzanne E. Roberts, beloved wife, mother and friend, died Saturday, June 16, 2018 at Cottage Hospital, surrounded by her children. She was 83 years old. Born in Miami, Florida on November 8, 1934, she moved to Santa Barbara with her mother, Eleanor Cabral, at the age of eleven. A popular and active student, she attended La Cumbre Jr. High School and Santa Barbara High, where, as a passionate “Don,” she proudly led the marching band as the school’s majorette. Upon graduation in 1952, Suzanne went to work at the Santa Barbara County Department of Social Services. In 1956, she was named “Young Businesswoman of the Year,” and later joined the firm of Westwick, Collison and Talaga as a legal secretary. A brief first marriage produced two daughters, Beverly and Marilyn. As a young girl, “Susie” often stopped by the Foster’s Freeze on De La Vina Street after school to order an ice cream cone from the tall, nameless teenager behind the counter. Many years later, when the two were set up on a date by mutual friends, the former ice cream scooper exclaimed, “I know that face!” On July 29, 1969, Army aviator (and former Foster’s Freeze ice cream scooper) John G. Roberts flew Susie, Beverly, Marilyn and Grandma in his Cessna 310 to Las Vegas, where they were married in a private ceremony at a local church. Susie found her true calling as a wife and mother. She was never happier than when she was shuttling her daughters to school functions, working with the La Colina and San Marcos High School PTA’S, attending Friday night football games and cheering her daughters on in school plays and concerts. She became a second mother to her daughters’ friends, many of whom turned to her for guidance, love and support for the rest of her life. As for her husband, John, she was his co-pilot – both in life and in the air. She assisted him with his insurance business and running the family’s commercial office building on Laguna Street. Given John’s passion for flying, Susie enrolled in Santa Barbara Aviation’s first Pinch- Hitter course for non-piloting passengers, where she was trained in emergency procedures, the use of radio and navigation equipment and basic flying maneuvers, including take-offs and landings. Throughout her life, Susie was committed to community service. She was an officer in the Assistance League of Santa Barbara, working on numerous philanthropic endeavors, including Operation School Bell, Hillside House, Casa Serena Residential Recovery Home for Women, the La Vista Club for the Blind, and La Morada County Residence for Girls, where she served as a mentor for troubled teens. Susie also joined John in his work with SEE International, flying doctors to Central and South America to provide free eye care to people in need. Inspired by a 2007 television report on an effort to knit scarves for the Red Cross, Susie decided to make a personal contribution to the war effort by knitting 110 scarves for U.S. military personnel stationed in Iraq and Afghanistan. Her work was featured in the Santa Barbara News Press and earned her a place in the hearts of service men and women who sent her personal thank-you notes. Once their daughters had grown, Susie and John built their dream home on the Blackfoot River outside Missoula, Montana, where they spent happy summers with extended family and friends. They also travelled the country to participate in countless Aviation Country Club “fly- ins” and enjoyed many round-up barbecues at San Lucas Ranch. After John’s death in September of 2017, Susie embarked on the final chapter of her amazing life, taking on full oversight of the family business and joining the thriving community at Maravilla Senior Living, where she continued to make new friends. In addition to John, Susie is preceded in death by her mother, Eleanor Cabral and her son-in-law Frank Cavaliere. She is survived by her daughters, Beverly Cavaliere and Marilyn Osborn, both of Los Angeles, and her son-in-law, Jeffrey Eckerle, also of Los Angeles. Susie’s huge heart, voracious curiosity, infinite compassion and unmistakable laugh will be missed but never forgotten by those whose lives she has touched.

The family of Suzanne E. Roberts created this Life Tributes page to make it easy to share your memories.

SUZANNE E. ROBERTS
“The most beautiful word on the lips of mankind...