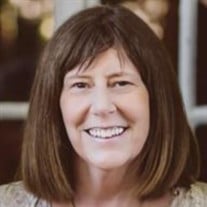 Teresa Mae Bannon (Velasco) was born on March 17th, 1958, in Maywood, California. She passed in her Goleta home on April 11th, 2022. She was 64 years young. While Teresa’s passing came too soon, she had created a bountiful life full of friends, family, and adventures. Teresa worked hard throughout her life, successfully turning her dreams into reality. As a young child, Teresa lived in Torrance and attended Hamilton Elementary. By her pre-teens, she had already begun her lifelong travel expeditions, having spent the better part of a year in Mexico being exposed to a completely different way of life. In Spring of 1973, Teresa moved to Goleta and graduated from St. Raphael School. There she formed her core group of friends, whom she affectionately referred to as the “Ya-Yas”– their friendship ran deep and lasted throughout her life. At home, Teresa’s days were filled with even more friendship, laughter, and fun. She had seven brothers and sisters who kept life entertaining and busy. Even with so many siblings, Teresa always found the time for each one, and she cultivated close relationships with all of them that she maintained her entire life. There was nothing Teresa loved more than spending time with family, especially when they were all together. Teresa went on to attend Bishop Garcia Diego High School, where she played on the basketball team and was a mat maid for the wresting team. When Teresa graduated in 1977, she resumed her world travels, taking an exciting excursion through Europe where she camped her way through Germany, Switzerland, Austria, Italy, Spain, France, Belgium, Holland, and the Netherlands. Upon her return, Teresa enrolled at Santa Barbara City College and graduated in 1979. In 1981, Teresa transferred to CSU Long Beach where she received her bachelor’s degree in applied psychology. After graduation, Teresa lived in Huntington Beach and started working as a bank teller at Coast Federal Savings, quickly gaining the admiration of customers and working her way up to branch manager. Although life was different than in Goleta, it felt like home with one sister and one brother living in her same apartment building. In 1986, Teresa gave birth to her first son. She made her return to Goleta shortly thereafter, and had her second son in 1988. While Teresa had her hands full raising two young boys, she also found time to run a daycare in her home for twelve other children. Teresa’s third child, a daughter, was born in 1990. As a single mother with three children, Teresa returned to Santa Barbara City College and graduated in 1994 with her associate of science degree in nursing. Shortly after, Teresa became a registered nurse at Goleta Valley Hospital before transferring to Santa Barbara Cottage Hospital, where she worked for close to 28 years. Although Teresa worked in many departments, she ultimately found her calling in the Mother-Infant unit. Teresa was an impeccable nurse who often came home with flowers and thank you cards from grateful patients. Teresa also created a family among her co-workers, whom she adventured with all over the country and formed friendships with for decades. Teresa was a natural carer, and often found herself nursing outside of the hospital as well. She watched over countless neighbors and friends, even after coming home from twelve-hour overnight shifts. She lovingly took care of both of her parents before their passing and never hesitated to run to anyone’s aid on the street whenever she saw the need for help. Speaking fluent Spanish, Teresa often used her skill to translate both in and out of the hospital — she loved being able to help twice as many people. Helping others was a true passion of hers. Teresa relished raising her young children, and although she worked full time to make ends meet, when life told her no she would create a yes. She planned family vacations every year, even when it meant she needed to put chains on her tires in the snow to drive her kids up a mountain, or study a map in a thunderstorm to drive them to the next hotel on a trip through the Southeast to see the Olympics. Each year she made a point of taking her children to their great-aunt’s cabin in Big Bear, followed by a fun time at an amusement park. Teresa prided herself on having three college graduates, and she held close relationships with all of her children whom she loved deeply and always encouraged to proudly be themselves. She constantly showed support to her kids, whether that meant cheering them on in their sports games, visiting them in Europe during a semester abroad, attending countless punk concerts, displaying and admiring their artwork, or just making them laugh when they needed it. Teresa persevered through many of life’s challenges and made it look easy. In 2005, she was diagnosed with breast cancer and underwent surgery, chemotherapy, and radiation treatment, but ultimately won her battle. She had well over fifteen surgeries throughout her life, but none of them could change her can-do attitude or stop her from living life her own way. In 2019, she singlehandedly purchased her dream home, which she decorated beautifully with a cozy and welcoming touch. The garden she created in her backyard was diverse and unique, and each plant had a story — she collected clippings from her friends and family, and loved giving intricate garden tours that held years of personal history and sentimental memories. Teresa will be remembered for her one-of-a-kind charm, her strength, and her unapologetic attitude towards life. She will be deeply missed by so many. She is survived by her children, Jason Bannon, Ryan Bannon and Colleen Macfadyen; her brothers and sisters, Jill Saeli, Jerry Velasco, Linda Rinehart, Tom Velasco, John Velasco and Frank Velasco — and of course the two cats she absolutely loved, Tiger and Filbert. A funeral Mass will be held for Teresa at Saint Raphael’s Church on Friday, April 22nd, at 10:00 a.m. followed by a reception in the Parish Hall. In lieu of flowers, please send donations to CADASIL research and advocacy via www.cureCADASIL.org

Teresa Mae Bannon (Velasco) was born on March 17th, 1958, in Maywood, California. She passed in her Goleta home on April 11th, 2022. She was 64 years young. While Teresa&#8217;s passing came too soon, she had created a bountiful life full... View Obituary & Service Information

The family of Teresa Mae Bannon created this Life Tributes page to make it easy to share your memories.