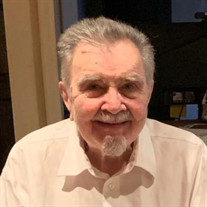 Thomas Edward Rook On Tuesday, February 1, 2022 Thomas (Tom) Rook of Santa Barbara, CA, father of 9, passed away peacefully at the age of 93. Tom was the son of the late William and Catherine (Murray) Rook. Loving father of Dr. Thomas W Rook and his late wife Nina (Wilding); Denise Marie Rook; the late Jacqueline “Jackie” Rook; Barbara Rook; Arthur Rook and his wife Stacey (Sutter); Maribeth (Rook) Byerley and her late husband Dave; Patricia (Rook) Amboian and her husband Michael; Stephen Rook and his wife Sharon; Frank Rook and his husband Brian Harkins. Cherished grandfather of Davis Rook and Anna (Rook) Del-Rosario and her husband Benjamin; Jessica, Malia (Byerley) Carter and her husband Bryant, Sadie Anne and Alec Byerley; Mike and Megan Amboian; and Emily and Rachel Rook. Fond great-grandfather to Jasmine Byerley. Tom was born November 4th, 1928 in Chicago, IL, the eldest of eight children. Tom is survived by his ex-wife and mother of his children, Ellen Denise (Fitzgerald-Rook) Jacobs of North Hollywood, CA; his sister Alma Jean (Rook) Pettit and his brother Joseph (Joe) Rook and his wife Karolyn, sister-in-law Lori, and sister-in-law Sylvia. Tom was predeceased by his brothers Robert (Bob), William (Bill) and wife Joy and second wife Julie, James (Jim), David (Dave) and his wife Mae, sister Marie (Rook) Andrejasich and her husband Frank, sister-in-law Valerie, and brother-in-law Jerry Pettit. Tom was also an Uncle to a wealth of nieces and nephews. Highlighting his creative energy, Tom’s chosen profession was in the film industry. Early in his career he was a Director and Producer at the advertising agency Foote, Cone & Belding in Chicago, IL before moving to Los Angeles, CA as an Executive Producer for Leo Burnett Advertising. Tom was influential with directing and producing many TV commercials, including, but not limited to, Smokey the Bear, Datsun, Tony the Tiger, Toucan Sam, Avis, Hallmark greeting cards and The Pillsbury Dough Boy. He won a Clio Award (recognizes innovation and creative excellence in advertising) for the Hallmark commercial What a Day. Tom was also a member of the Directors Guild of America and directed episodes of a TV show from the early 1960’s, Light Time, along with short films including Nail and Parable. Parable was made for the 1964 New York World’s Fair; in 2012 the film was entered into the National Film Registry by the Library of Congress as a historic film that was influential to the American Culture. Tom was born and baptized in Visitation Parish, Chicago, IL, and became a member of their choir due to his love of music and God. With his artistic insight Tom was instrumental with the recording of the choir to produce an album CAROLS and MOTETS sung by the Choir of Visitation Church in 1958. His continued spiritual journey led him to discover the Self-Realization Teachings of Hindu Guru Paramahansa Yogananda. Tom was a devotee and disciple of yoga master Yogananda, and was a longtime member of Self-Realization Fellowship. Tom found much peace with his practice of meditation, calming the mind, breath and heart to receive peace, wisdom and love. “Live quietly in the moment and see the beauty of all before you.”

The family of Thomas Edward Rook created this Life Tributes page to make it easy to share your memories.