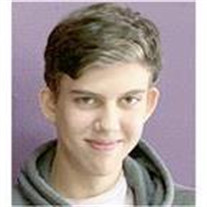 Trevor Marshall Green Katz was with us for almost 17 years. He made the most of his time, connecting with many, and adored by his family. A gentle spirit with a wry wit, Trevor was one of a kind and will be greatly missed. His memory and generous spirit will live on. Trevor was born on February 26, 2003, in Torrance, California. When he was three, his family moved to the Santa Barbara/Goleta area. Trevor had many happy days at Goleta Valley Nursery School, Kellogg Elementary School, Goleta Valley Junior High, and Dos Pueblos High School. Trevor had many friends. He loved to learn and to help others. Trevor was a Cub Scout, with Pack 36, for 3 years. He happily worked every Kellogg School event he could, be it Movie Days or Science Night, and then returned after graduation every year to help at Carnival. He volunteered for the GUSD gifted and GVNS summer schools. He loved being an office assistant at GVJH, and returned after graduation to assist with Regatta. He enjoyed community service. One of Trevor's greatest passions was Safety Town. He first attended at the age of five. He became a counselor the summer after 7th grade, spending his next 3 summers there. Nothing gave him greater pleasure than working with the incoming kindergarteners, serving as a role model to the students and other counselors, and singing silly songs. Trevor was a proud member of the Dos Pueblos Engineering Academy and the cross country and track teams. He was an academic mentor to the engineering freshmen during his sophomore year, and served as a math tutor, proudly wearing his PASS t-shirt. His classmates and teammates, as well as those he tutored, describe him as sweet, kind, funny, thoughtful, tough, never one to complain, and always with a smile on his face. Trevor began working as a retail specialist at the Santa Barbara Zoo in the summer of 2019, and enjoyed the friendships and camaraderie of his fellow employees. Trevor was diagnosed with biliary atresia, a rare medical condition, shortly after birth. Complications of this disease lead to Trevor's sudden death on February 3, 2020. But he never once let it hold him back from all that life had to offer. When Trevor left us, he was doing what he loved, with those he loved. Trevor is survived by his parents Nicole and Jared; his older brother Owen; his younger sister Justine; his aunts and uncles Lisa Green, Deborah and Scott Suler, Aaron and Michele Katz; cousins Jack, Mitch, Allison, Elizabeth and Jordan; and grandparents Gil and Diane Green, Mary Katz and Art and Maggie Katz. Trevor was laid to rest at Goleta Cemetery. A celebration of his life will be held on Sunday, February 23, at 11:00 a.m. in the EPAC at Dos Pueblos High School, followed by a reception in Sovine Gymnasium. In lieu of flowers, donations can be made in Trevor's honor to Safety Town of Santa Barbara County, sbsafetytown.org, P.O. Box 146, Santa Barbara, CA 93102-4016.

Trevor Marshall Green Katz was with us for almost 17 years. He made the most of his time, connecting with many, and adored by his family. A gentle spirit with a wry wit, Trevor was one of a kind and will be greatly missed. His memory and generous... View Obituary & Service Information

The family of Trevor Marshall Katz created this Life Tributes page to make it easy to share your memories.

Trevor Marshall Green Katz was with us for almost 17 years. He...