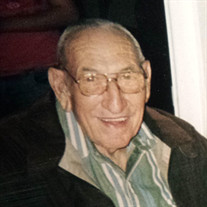 ARNOLDI, UGO D. One of the “GREATEST GENERATIONS” Ugo D. Arnoldi passed away from pneumonia and dementia Tuesday November 24, 2015 at Mission Terrace where he was known as Pajarito (Song Bird) or Papa. He was born March 15, 1925 in Santa Barbara. He was the son of Giuseppe “Joe” and Ilda Arnoldi, whom are both deceased. Ugo grew up on the Eastside of Santa Barbara. He went to Franklin Elementary School, Santa Barbara Junior High School and Santa Barbara High School Class of 1944. Ugo played on the Don’s football team also on the Don’s track team. During the meet in 1943 the lanky ace hurdler garnering the 120-yard high hurdles also the 120-yard low hurdles in respectable times and went on to take the hop-skip-jump event with a leap of 39 feet 6 inches. He then ran the 440-yard relay. That day he took two first places and a point and one-half for winning the relay. Ugo was the Track Athlete of the Year for Santa Barbara High School in 1943. Ugo, was drafted into the United States Army June 9, 1943, during World War II just two weeks before he was to graduate from high school. His first assignment upon landing in France was a machine gunner in the back of reconnaissance jeep. He recall the breaking out of Normandy also on the front lines of the Battle of the Bulge. He was under the direction of General George S. Patton Third Army 2nd Calvary, they were known as “The Ghost of Patton’s Army”. Ugo was discharged January 10, 1946 from Fort MacArthur as a Corporal. Ugo was a Life member of Santa Barbara Elks #613, Bricklayers & Allied Craft Workers Local No.4 and Amvets of California. Ugo loved to hunt, fish and bowl. Ugo started bowling in 1952, he bowled at Figueroa Bowl, Barbara Bowl, Fiesta Bowl, San Marcos Bowl/Lanes and Orchid Bowl. He bowled his first 300 game on July 7, 1961 open bowling at Fiesta Bowl. He bowled his first sanction league 300 February 15, 1963 at Fiesta Bowl. For over ten years Ugo held the highest game of 299 bowled at Orchid Bowl in 1971. In 1963 he and four members that were on the Arnoldi’s Masonry team held the highest score bowled by five men, it was tied by another team in 1986 some years later broken by another team. During the 1973 City Bowling Tournament he won First Place in four events. Ugo worked side by side with his father and partner Joe Arnoldi. He was a masonry contractor for over fifty years. They owned Arnoldi’s Masonry. He did stone work all over Santa Barbara, Hope Ranch, Montecito, Santa Paula, Goleta, Santa Maria, Cachuma Lake and Santa Ynez Valley. No matter where we go, we will always see the beautiful hard labor of work that a true stonemason who uses a chisel and a single jack hammer built. Ugo would say “Stonemason work can’t be duplicated it’s like putting a puzzle together, making sure that all the pieces fit just perfect.” In his mind he was still doing stonework, his hands always working up until his death. He also did bartending at the family restaurant Arnoldi’s Café, also the book keeper for both businesses. When his daughter and son attended Santa Barbara Junior High and Santa Barbara High School, he and his wife chaperoned many dances and band events. Ugo married the love of his life Anne Marie Acerboni (Barbisan)at the Santa Barbara Old Mission on December 26, 1948. Anne pre-deceased April 15. 2005. They are together once more. He leaves behind his daughter Jeanette Marie Arnoldi-Schall (Wally), son Ugo “Butch” Arnoldi (Marla), three grandsons Tim Arnoldi Brown. Bobby Arnoldi Brown, Giuseppe Arnoldi, one granddaughter Francesca Arnoldi, his little sweetie great-granddaughter Annie Lynn Brown. Also numerous cousins in California, Nevada, Colorado and Italy. His extended family at Mission Terrace where he has lived for almost four years. A special thank you to Adrienne DePonce-Bates and Dale Ramirez. In lieu of flowers please donate to Alzheimer’s Association 1528 Chapala Street Santa Barbara, CA 93101, Visiting Nurse & Hospice Care 512 East Gutierrez Street, Suite A Santa Barbara, CA 93103 in memory of Ugo D. Arnoldi, or your favorite charity. Visitation will be held Friday December 4, 2015 11:00AM to 3:00 PM at Welch-Ryce-Haider, 15 East Sola Street. Mass will be Saturday December 5, 2015 at 10:30 AM at Our Lady Of Sorrows Church 21 East Sola Street Immediately followed by Military graveside service at Calvary Cemetery, 199 North Hope Avenue, Santa Barbara, CA

ARNOLDI, UGO D. One of the &#8220;GREATEST GENERATIONS&#8221; Ugo D. Arnoldi passed away from pneumonia and dementia Tuesday November 24, 2015 at Mission Terrace where he was known as Pajarito (Song Bird) or Papa. He was born March 15,... View Obituary & Service Information

The family of Ugo D. Arnoldi created this Life Tributes page to make it easy to share your memories.