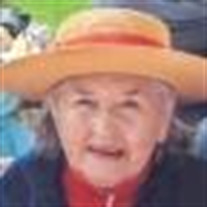 May 20, 1921 - June 21, 2015 Vivian, 'Vie,' passed away peacefully at the age of 94. Vivian and George moved to Santa Barbara in 1947. Vivian, with George's support, became a dedicated volunteer who received numerous recognitions in her lifetime. Vie was a founding member of the SB Trails Council dedicated to preserving trails. She enjoyed riding her horse with the Sage Hens and in the back country as well as riding her bike around town. One of her major achievements was initiating and helping raise the millions of dollars needed for the construction of the seven-mile Goleta bikeway, which was named The Obern Trail. Vie's interest in Santa Barbara area history was inspired by Pearl Chase. Vie became known as one of 'Pearl's Girls.' This interest inspired George and Vivian to purchase the condemned house built by Thomas Hope for their twenty-fifth wedding anniversary in 1965. They were able to restore Hope House and it is now a county historical landmark and on the national register of historic places. Vivian also became interested in preserving more local history with the Santa Trust for Historic Preservation. You may see her handy work inside the chapel where she and George helped paint the inside details. They loved the events, making mud bricks, Presidio Day, De Anza reenactment and the many dedicated people who continue to treasure local landmarks. In lieu of flowers, please make donations in Vivian's name to: the Santa Barbara Trust for Historic Preservation 123 E. Canon Perdido, Santa Barbara, CA 93101; the Santa Barbara Trails Council, P.O. Box 22352, Santa Barbara, 93121 (or www.sbtrails.org); the Principia, Annual Fund Office, 13201 Clayton Road, St. Louis, MO, 63131 (or www.principiagiving.org); and the Care Committee of the First Church of Christ Scientist, 120 E. Valerio, Santa Barbara, 93101. Vivian's graveside service will be Friday, July 31, 2015 at 1:00, Santa Barbara Cemetery. A Celebration of Life will be held Saturday, August 1, 2015, Unitarian Society Church, 1535 Santa Barbara St, 2:00 - 4:00. Guests are invited to wear attire suitable to their affiliation with Vie in such organizations as Fiesta, Trails, de Anza, DUV, Sage Hens, and so on, as well as share some memories of Vie. -

May 20, 1921 - June 21, 2015 Vivian, 'Vie,' passed away peacefully at the age of 94. Vivian and George moved to Santa Barbara in 1947. Vivian, with George's support, became a dedicated volunteer who received numerous recognitions in her lifetime.... View Obituary & Service Information

The family of Vivian H. Obern created this Life Tributes page to make it easy to share your memories.